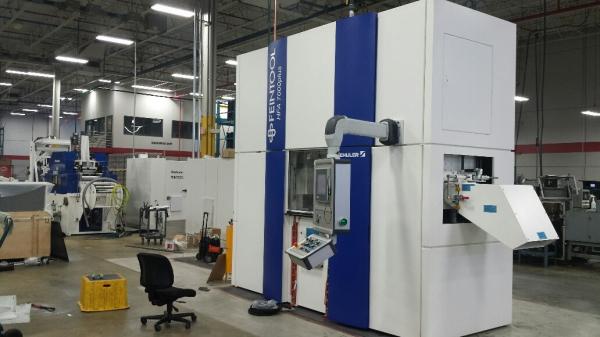 New programs continue to be on the rise as well. The team is currently working on 5 new jobs with one that is in the award stages and will utilize the 700 plus press capacity.

With this growth, we have added in-house machining capabilities. Our customers are supportive of the decision and which has made Jagemann™ more competitive on certain components in the market place. As part of this process, we have purchased a Robodrill for a high volume job that involves milling a pocket in the fineblanked component and moved a Mazak machining center from the toolroom to the plant floor.  The Mazak will machine lower volume components with longer cycle times. Next, the team is investigating machining in house a facing of a flange surface for plate housing. This will utilize the Wasino lathe as the current production volume is declining, which in turn will open up capacity.

The new HFA 700 plus Fineblank press has been fully installed and has been operational since June. A set of 250 ton tool adapter rings has been designed and built to run some of the thicker material 250 ton jobs. . We have a high volume job which the tool is built and is in final try outs that is planned to start production early 2016 in the new 700 plus press. Lastly, the newly awarded job is a four part number high volume program for this press.